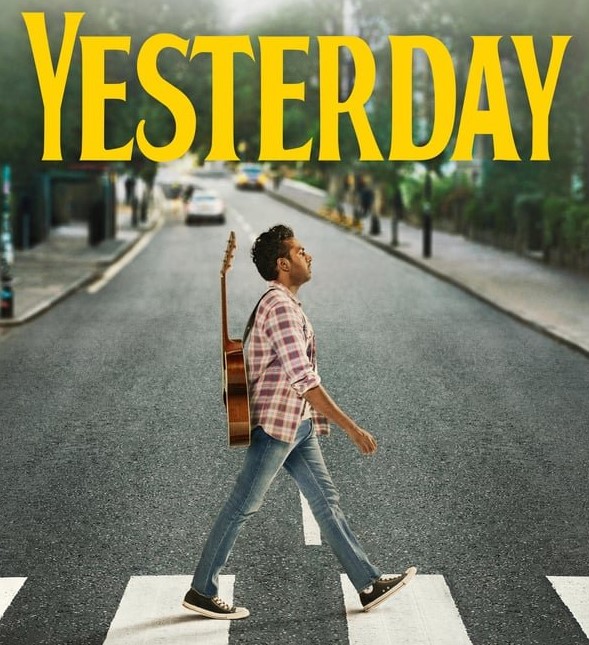 Yesterday is a 2019 romantic comedy film directed by Danny Boyle and written by Richard Curtis, based on a story by Jack Barth and Curtis. It stars Himesh Patel as struggling musician Jack Malik, who, after an accident, finds himself the only person who remembers the Beatles and becomes famous after taking credit for their songs. The film also stars Lily James as the protagonist’s childhood friend and love interest, Kate McKinnon as his manager, and Ed Sheeran as a fictionalised version of himself.

The project was announced in March 2018. Filming began the following month around England, particularly Suffolk. Photography also took place at Wembley Stadium, Principality Stadium and in Los Angeles. The filmmakers paid $10 million for the rights to use the Beatles’ music; although none of the Beatles were involved, Boyle received blessings from them and their families.

Yesterday had its world premiere at the Tribeca Film Festival on 4 May 2019, and was released in the United Kingdom and the United States on 28 June 2019, by Universal Pictures. The film grossed $144 million worldwide against a production budget of $26 million, and received mixed reviews from critics, with praise for the premise, performances and musical sequences, but criticism of the familiarity and not taking the concept further.

Jack Malik is a struggling singer-songwriter from Lowestoft. His manager and childhood friend Ellie Appleton encourages him not to give up on his dreams. After Jack is hit by a bus during a global blackout, he sings «Yesterday» for his friends, and discovers they have never heard of the Beatles. After realising the world no longer remembers the band, Jack begins performing their songs, passing them off as his own.

Ellie has Jack record a demo with a local music producer. Following a performance on local television, Jack is invited by pop star Ed Sheeran to play as his opening act in Moscow. Ellie declines to join him, saying she must work at her day job as a schoolteacher, so Jack’s roadie friend Rocky travels with him instead. After the gig, Sheeran challenges Jack to a songwriting duel; he loses to Jack’s «The Long and Winding Road». In Los Angeles, Sheeran’s ruthless agent Debra Hammer signs him to her label and engineers his rise to global fame.

At Jack’s going-away party, Ellie confesses that she has always been in love with him. Jack goes back to Los Angeles and starts recording the album at EastWest Studios, but fails to come up with lyrics for the songs. Hoping to trigger memories through association, Jack goes to the Beatles’ hometown of Liverpool, visiting landmarks such as Strawberry Field, Penny Lane, and «Eleanor Rigby’s grave». Ellie joins him in Liverpool, and they spend a drunken evening and kiss, but Ellie tells him she is not interested in a one-night stand. The next morning, Jack and Rocky pursue Ellie to the train station, where she congratulates Jack but tells him she cannot be a part of his celebrity life. Jack returns to Los Angeles, heartbroken.

The record label prepares to launch Jack’s debut album. The producers reject his suggested titles, taken from Beatles records, and name the album One Man Only, pushing his talent. Jack persuades them to launch the album with a rooftop concert in Gorleston. Backstage, two fans approach him and tell him they know he plagiarised the songs, but thank him, fearing the music was gone forever. They give him the address of John Lennon, who has survived into old age, out of the public spotlight. Jack asks Lennon if he has led a successful life; Lennon replies that he has lived happily with his wife. He advises Jack to pursue the one he loves and always tell the truth.

Sheeran arranges for Jack to perform at Wembley Stadium. Jack confesses to the crowd that he plagiarised the music and that he loves Ellie, and has Rocky upload the songs free to the internet, sabotaging the record release. Jack and Ellie marry and have a family together, and Jack becomes a music teacher.

The film began as an original screenplay called Cover Version, by writer Jack Barth and actor-writer-director Mackenzie Crook, with Crook intending to direct the film. A few years later, after Crook had dropped out due to other commitments, the story was pitched to writer-director Richard Curtis, who loved the idea but wanted to write his own script for it. Whereas in Cover Version, the lead character achieves only moderate success with the Beatles songs, Curtis’s lead character becomes the world’s most celebrated singer-songwriter. Curtis also shifted focus onto the love story between the male and female leads.

In March 2018, it was announced that director Danny Boyle and writer Richard Curtis were working together on a musical comedy that would be set in the 1960s or 1970s and centre on «a struggling musician who thinks he’s the only person who can remember The Beatles» with Himesh Patel cast in the lead role. Ed Sheeran’s supporting role was originally intended for Chris Martin, who turned it down.  For the lead role, Patel was selected from the many actors who auditioned, with Boyle convinced Patel was the right choice after listening to him perform «Yesterday» and «Back in the U.S.S.R.» during auditions. Boyle felt that Patel’s voice had soul; Sheeran agreed. In addition to acting, the Beatles cover songs in the film are sung by Patel, who also plays the guitar and piano.

Later in March 2018, Lily James and Kate McKinnon joined the cast. Boyle informed the surviving members and widows of the band about the film and received a reply he described as «lovely» from Beatles drummer Ringo Starr. In April 2018, it was revealed that Ed Sheeran had joined the cast and would potentially also write new music for the film, which would also include Beatles songs. Later that month, Ana de Armas and Lamorne Morris had also joined the cast. In May 2018, Sophia Di Martino, Joel Fry and Harry Michell joined.

Filming began on 21 April 2018, with production in the United Kingdom starting on 26 April 2018, with scenes filmed all around Suffolk in Halesworth, Dunwich, Shingle Street, Latitude Festival and Clacton-on-Sea, Essex. A casting call was issued for extras in overnight scenes shot immediately after Sheeran’s four consecutive concerts at the Principality Stadium in Cardiff, Wales in May 2018. A further 5,000 extras were also recruited to appear in scenes shot on Gorleston-on-Sea Beach in Norfolk in June 2018. Wembley Stadium was also used to film a concert scene. Filming also took place in Liverpool, making use of Penny Lane, Liverpool John Lennon Airport, Lime Street Station and the Queensway Tunnel.

In February 2019, it was announced that the title of the film was Yesterday. It is estimated to have cost around $10 million to get the rights for the Beatles’ songs to be featured in the film, with the rights to their music being held by Apple Records and Sony/ATV Music Publishing. Scenes with de Armas, who played another love interest for Jack, were cut as test audiences felt it made Jack less sympathetic.

The film was initially set to be released on 13 September 2019, but was moved up several months earlier to June 28 largely because, due to a copyright lawsuit filed by Paul McCartney, Sony Music’s rights to some of the Beatles songs used in the film would start reverting to him by the fall of 2019. It had its world premiere at the Tribeca Film Festival on 4 May 2019. A local premiere of the film took place at the Gorleston Palace cinema on 21 June 2019.