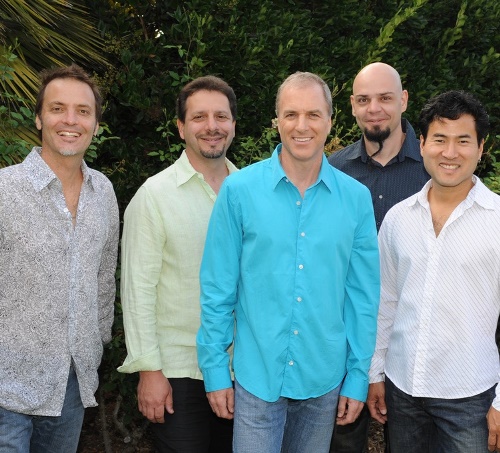 The Rippingtons are an American contemporary jazz group mainly relating to the genres smooth jazz, jazz fusion, jazz pop, and crossover jazz. Formed in 1986 by guitarist and band leader Russ Freeman, their career has spanned four decades. With a revolving door of musicians, Freeman has been the only consistent member.

Many of their songs have been played during The Weather Channel’s local on the 8’s forecast segments. The song Morocco, from the album Kilimanjaro, was often used on KHON2’s morning news. The band’s mascot is a grinning, sunglasses-wearing, jazz cat which appears in the artwork of all the band’s releases and on their official website.

The band name was conceived by Russ Freeman after hearing friends play «and they were ripping», so Freeman thought of Rippingtons for a name.

The band’s recording career began in 1986 with the recording of Moonlighting. The album was well received by critics and consumers and featured the song «She Likes to Watch,» which has gone on to become a staple of the band’s live set and one of their signature tunes. In January 1988 the Rippingtons released Kilimanjaro and began to tour more extensively. Mark Portmann, Steve Bailey (replacing Bill Lanphier), and Jeff Kashiwa joined the band, the band then released Tourist in Paradise. The tour for this album featured the group’s first visit to Japan with David Benoit in 1989, where they joined the special summer concert series in Tokyo produced by Japanese saxophonist, Sadao Watanabe.

In August 1990, the year bassist Kim Stone joined the group replacing Steve Bailey, the album Welcome to the St. James’ Club was released and became the band’s first CD to debut at #1 in the Billboard Charts.

In 1991, Russ Freeman relocated to Colorado and opened Cheyenne Mountain Ranch studios. The move influenced the group’s next album, Curves Ahead, which featured songs based on the ski atmosphere in Colorado. Standouts include «Aspen» and the title track.

In August 1992, the group released Weekend in Monaco, which, to date, has been one of their best selling albums. After its release the group toured Europe for the first time and in June 1993. The U.S. leg of the tour was documented on the album Live in L.A., with the video recorded live at The Ventura Theatre, Ventura, California on September 25, 1992 and the album recorded at The Greek Theatre, Los Angeles, California on September 26, 1992.

Tom McMorran joined the band in 1994 after Mark Portmann left and in August of that year the band released Sahara. The following tour featured extensive dates in East Asia, where the group played Tokyo, Osaka, Fukuoka (Japan), and Southeast Asia including Jakarta (Indonesia), Manila (Philippines) as well as Singapore and Guam.

In 1995, David Kochanski joined the group and the group made its presence known on the Internet. February 1996 saw the release of Brave New World, which featured covers of «Ain’t No Stoppin’ Us Now,» «While My Guitar Gently Weeps,» and «Caravan of Love.» The album was a stylistic departure for the band and included more Urban Jazz than had appeared on previous releases. Tony Morales, the original drummer, left the band in 1994 to pursue a career in web management. Morales put together the Rippingtons’ first web site, which was nominated for an AOL award (Best Jazz Band Site). He later became the webmaster and manager of Silicon Graphics International’s web sites for 10 years, and now has his own hosting and development business tonyhosting.com.

In August 1997, the group released Black Diamond, their first record on Peak Records in conjunction with Windham Hill Records. The album debuted at #1 on Billboard. In 1999 Dave Hooper and Ramon Yslas joined the Rippingtons and Jeff Kashiwa was replaced by Paul Taylor. In May 1999 the group released Topaz, which featured Native American flute work by Robert Tree Cody. Topaz remains one of the group’s most requested CDs.

In 2000 Russ Freeman relocated to South Florida and the move was reflected thematically in Life in the Tropics. This was the group’s first album to be recorded digitally. In 2001 Scott Breadman, Bill Heller, Dave Karasony, and Eric Marenthial joined the group and the following tour was documented on the live album Live Across America. In 2002 the group released Let It Ripp, featuring the title cut, which became a hit.

On March 10, 2009, the Rippingtons made a return to the contemporary jazz scene with the release of the album Modern Art. A new bassist, Ricardo «Rico» Belled, participated in the recording of this album.

In October 2009, the Rippingtons returned to Japan to perform four nights (eight gigs) at the Cotton Club in Tokyo. This was their first-time return to Japan in 18 years.

On December 3, 2009, their latest album, Modern Art, was nominated for a Grammy in the category «Best Pop Instrumental Album.»

In 2011, the Rippingtons took listeners to the French coast with the thematic album, Côte D’Azur.

The group released Built To Last on August 28, 2012, featuring Zakk Wylde and a full orchestra. This album was the first for the Rippingtons under its new partnership with E1 Music.