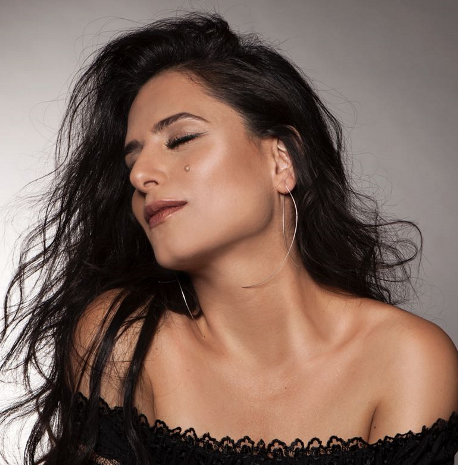 Miri Mesika (Hebrew: מירי מסיקה; born May 3, 1978) is an Israeli singer and actress. She won several Israeli Female Singer of the Year awards. She has sold more than 200,000 copies of her albums in Israel.

Miri Mesika was born and grew up in Herzliya, Israel to a father of Tunisian-Jewish descent and a mother of Iraqi-Jewish descent. As a child she studied music, and played the guitar and the recorder at the city music school. In 1994, she was accepted to HaYovel High School, where she studied theatre and music. She served as an operations NCO in the IDF’s Infantry Corps.

In 1999, Mesika started her studies at the Rimon School of Jazz and Contemporary Music in Ramat HaSharon, the leading music school in Israel that exported many Israeli singers such as Noa and Aviv Geffen. She was part of the «magic class», studying together with Keren Peles and Aya Korem, that went on to be popular singers.[1]

During her studies at Rimon, she participated in several ensembles. In one of them she met the musician Ori Zakh, who went on to become her husband and record producer. Miri and Ori married on 2 June 2005.

At Rimon School Mesika met the songwriter Keren Peles, with whom she started working on songs for Mesika’s debut album. After graduating, Mesika created a live show based on songs by Keren Peles. The show, produced and engineered by Ori Zakh, included the songs November and LeSham. The show was warmly received by the audience, and immediately afterwards Mesika was offered a recording contract with Hed Arzi Music under the Anana label.

After finishing music studies in Rimon, Mesika began studying Acting at the Sofi Moskovich School of Performing Arts. During her studies she acted and sang in various plays, including the main character in The Night of the Iguana and Blood Wedding.

Meanwhile, she participated as the soloist in tribute evenings to different poets, such as Hayyim Nahman Bialik, Natan Yonatan, Nurit Zarchi and Itzik Manger. Mesika and Zach also created a show composed of songs by the songwriter Tzruya (Suki) Lahav as part of the Piano Festival in Tel Aviv.

Mesika became known in public in 2004 with her first album, Miri Mesika, produced and mixed by Ori Zakh and Shmulik Neufeld. Miri Mesika’s first single, Tipa Tipa (טיפה טיפה, «Little by Little»), dealing with the recovery from a lost love, was released in November 2004 and achieved moderate success. However, the next two singles written by Keren Peles, November (נובמבר, January 2005) and LeSham (לשם, «To There», March 2005) were huge radio hits. LeSham won the Galgalatz award as Song of the Year.

The album saw light of day in March 2005 under the Anana label. More singles from the album were released afterwards. The song Ba’a Eleikhem (באה אליכם, «Coming to You») was released in July, and also gained much popularity. The lyrics describe a trusting relationship between a daughter and her parents, and the song has an up-tempo ethnic rhythm. Another single released in July 2005 is Af Akhat (אף אחת, «No one»), a song of a lover who would not give up her loved one, written by Tzruya (Suki) Lahav. The next single (November 23, 2005) was Shir LeShira (שיר לשירה, «A Song to Shira»), a cover version of Corinne Allal’s song. It is an emotional song of a mother promising to give a «new and good world» to her baby daughter, with lyrics written by Yehonatan Geffen. The last single from the album was the romantic song Ten Li Siman (תן לי סימן, «Give Me a Sign»), released in February 2006.

In 2006 Miri Mesika recorded the song Kluv shel Zahav (כלוב של זהב, «A Golden Cage») with Teapacks, which appeared on their album Radio/Musika/Ivrit.

Miri Mesika’s second album, Shalom LaEmunot (Good-bye Beliefs), appeared in February 2007. The release included a limited edition bonus CD of the songs from the movie Shalosh Imahot. Mesika went on a performance tour following the release of the album, and in May 2008 the album went platinum. This album, as the first one, was produced and mixed by Mesika’s husband, Ori Zakh.

Mesika and Berman released[when?] the song «Erev Hag» («Holiday Eve»), written by Berman and dedicated to Gilad Shalit, an Israeli soldier was held hostage by the Hamas for over two years. In the same month Mesika’s duet with Ofer Bashan, «HaOr Yizrah Gam Benifrad» («The Light Will Keep Shining Separated»), appeared on Bashan’s second album. In 2008, Mesika played the narrator in Joseph and the Amazing Technicolor Dreamcoat staged by Habima Theatre. In November 2008 she went on a tour of unpluggedperformances around Israel.

In 2005 Miri Mesika took part in the Habima Theatre production of the musical King Solomon and Shalmai the Shoemaker. The musical was widely praised and won the Musical of the Year award at the 2005 Israeli Theatre Awards.

In 2007, Mesika took part in Amos Gitai’s film, The Dybbuk in Haifa, and in the Festigal festival of children’s songs. In March 2008 she released a cover for Berry Sakharof’s song, «Kakha ze» («This Is How It Is») for the second edition of the project Hebrew Labor, dedicated to Israel’s 60-year anniversary.

In 2012, Mesika was a judge on Kokhav Nolad, the Israeli version of American Idol, and in 2016, she is a coach on the fourth season of «The Voice Israel».

At the 2008 Ami Awards of Music Channel 24, she received another Female Singer of the Year award.