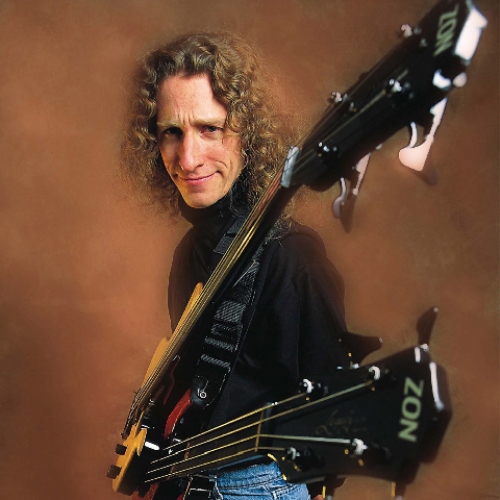 Michael Manring was born as youngest of four children. His family lived in Norfolk, Virginia and moved to the suburbs of Washington, D.C in 1969. The Manrings were a very active family musically, providing a very fertile background for Michael’s musical development. He and his brother Doug—a guitarist and drummer, later living a long time in Japan—formed a very active rhythm group while in high school, venturing through jazz rock and fusion, playing rock classics at beer parties or pop standards in restaurants and at weddings.

Manring was a pupil of bassist Peter Princiotto from Spring Hill area, Virginia. He began to study at Berklee College of Music in Boston, Massachusetts in the late 1970s, but canceled his studies in 1979 because of the heavy workload he already had, touring with several different bands like the Prog Rock band However. During his time at Berklee College he used every opportunity to play with very different musicians and bands. In the 1980s he studied and toured with Jaco Pastorius and began to develop his own style.

In addition to a long tenure in the 1980s as house bassist for Windham Hill Records, Manring has recorded with Spastic Ink, Alex Skolnick (in the bands Skol-Patrol and Attention Deficit, also featuring Tim Alexander from Primus), Larry Kassin, Tom Darter, Steve Morse, David Cullen, Alex de Grassi, Will Ackerman and many other noted musicians. He headlined his own band, Montreux, throughout the 1980s. He has been a member of Yo Miles!, Henry Kaiser and Wadada Leo Smith’s Miles Davis tribute band, since its inception. In 1994 Manring was polled Bassist of the Year by the readers of Bass Player magazine.  Manring’s name is also tied with that of fingerstyle guitarist Michael Hedges, who was a dear friend and fellow musician. Manring toured extensively with Hedges and played on all Hedges albums except one. Manring is known as a humble and gracious live performer with a gift for improvisation with guest musicians.

Since 2005 Manring is member of the band DeMania with guitarist Alex de Grassi and percussionist Christopher Garcia. Manring remains active, touring the world for performances and clinics. He lives in Oakland, California.

Because of his association with the Windham Hill label Manring often was seen as a New Age musician. He doesn’t see himself as belonging to a certain style or genre and often jokes about categorising his music. His album Thonk he termed for example «… the first New Age–Death metal–Fusion–album».

Manring has a solid musical knowledge and uses the bass as a solo instrument usually in alternate tunings, with additional possibilities and patterns invoked on the fly with lever-activated de-tuners and bridges, somewhat like a pedal steel guitar. He wants to show that the electric bass can be used in a musically rich and expressive way. Manring occasionally plays on two (or even three or four) basses at the same time during live performances. Manring is also a composer of experimental music, mixing technology and fretless bass with the sounds of kitchen implements and cardboard boxes, evidenced on his «Book of Flame» solo album.

He is a technical virtuoso, generally using his bass in very different ways. Mostly he plays a fretless bass, which gives him ample possibilities to change tone and pitch just like on acoustic bass. Manring is rhythmically very versatile and often uses polyrhythms. He’s said to do «… things on the electric bass that haven’t been done before, are nearly impossible, and (are) illegal in most states.». A unique technique employed by Manring is utilising Hipshot D tuners to change the tuning of one or more strings over the course of playing a piece.

Manring plays a custom bass by Zon Guitars, the so-called Zon Hyperbass, a very flexible instrument, which was developed by Joseph Zon and Manring, Special tuning pegs and a special bridge allow instantaneous tuning change of single strings as well as of all strings simultaneously by the action of several tiny levers, a system like that of the TransTrem guitar. The development of this special model was caused by Manring’s use of open tunings. When Manring began changing tunings during pieces by turning the pegs while playing, he soon realised the limitations of this approach. First he tried to overcome these limitations by changing a normal Music Man Sting Ray Bass, but then began to develop the Hyperbass with Zon. The Hyperbass has Bartolini pickups for every string and four Fishman Transducer for the body signals of the instruments.