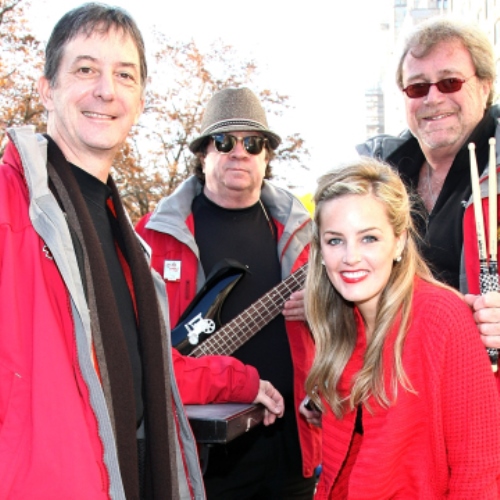 Mannheim Steamroller is an American rock band, founded by Chip Davis, that is known primarily for its series of Fresh Airealbums, which blend classical music and rock, and for its modern recordings of Christmas music. The group has sold 28 million albums in the U.S. alone.

Mannheim Steamroller began as an alias for record producer and composer Chip Davis. The name «Mannheim Steamroller» comes from an 18th-century German musical technique, Mannheim roller (German: Mannheimer Walze), a crescendo passage having a rising melodic line over an ostinato bass line, popularized by the Mannheim school of composition. Before the fame of Steamroller, Davis had been best known for collaborating with his friend Bill Fries on the songs of the country music character «C. W. McCall» (of «Convoy» fame). Even before the height of McCall’s popularity, Davis produced an unusual album of classical music performed entirely by Davis and musical collaborator and keyboardist Jackson Berkey, using electric bass (played by Eric Hansen) and synthesizers.

Since no major label would handle its distribution, Davis founded his own music label, American Gramaphone (a play on the classical record label Deutsche Grammophon), to release the album. The result, Fresh Aire, was released in 1975 under the pseudonym Mannheim Steamroller. Fresh Aire II was subsequently released in 1977 and Fresh Aire IIIwas released in 1979. The first four Fresh Aire albums constituted an exploration of the four seasons, with Fresh Aire being spring, Fresh Aire II being fall, Fresh Aire III being summer, and Fresh Aire IV being winter. All four of these albums maintained the blend of baroque classical music, light jazz, and rock, and featured Jackson Berkey’s virtuosic keyboard work. Davis and Berkey would use whatever instrument seemed appropriate to the piece, using toy piano on one piece and full pipe organ on another, with copious interleaving of piano and harpsichord. In 1981 Davis released Fresh Aire Interludes, an album that compiled Berkey’s 10 piano interludes from the first four Fresh Aire albums.

Davis then moved into exploring some other themes, with Fresh Aire V being subtitled «To the Moon,» Fresh Aire VI exploring Greek mythology, Fresh Aire 7 being based on the number 7, and Fresh Aire 8 being based on the theme of infinity. A live tour of the early albums featured a prominent light show and multimedia components, along with spoken poetry by Almeda Berkey. While the music was slightly different from the album versions, the music was played in lockstep at each show, as it had to coordinate the live musicians with recorded tracks of strings and other orchestral parts.

In 1986, Mannheim Steamroller released music composed for a PBS special called Saving the Wildlife, which featured one track from Fresh Aire VI and twelve new tracks. In 1987, Davis collaborated with guitarist/composer Mason Williams for the album Classical Gas. The music was composed entirely by Williams but produced and arranged by Davis. The album opens with a remake of Williams’ 1968 instrumental «Classical Gas», which used the original arrangement.

Beginning in 1984 Steamroller found its greatest fame. Davis released his first holiday album, Mannheim Steamroller Christmas, featuring modern contemporary interpretations of Yuletide favorites. This was followed by A Fresh Aire Christmas (1988) and Christmas in the Aire (1995), which showcased creative approaches to old carols, as well as some new carol-like compositions. Steamroller had now become one of the most requested Christmas music artists of all time, in part by adopting a very radio-friendly approach. (In addition, their music was featured around Christmastime by Rush Limbaugh, whose conservative talk radio program was gaining popularity around this time.) By the end of 1997, they had released a live album of Christmas music, Mannheim Steamroller Christmas Live. 2001 saw the release of their fourth all-new Christmas album, Christmas Extraordinaire. However, sales of Steamroller’s third and fourth Christmas releases had dropped dramatically, falling far short of the massive sales of Christmas and A Fresh Aire Christmas. Christmas Celebration, a compilation of favorite tracks from the previous studio albums (with one new song), was released in 2004. The studio album Christmas Songwas released in late 2007 and features guest vocals by Johnny Mathis and Olivia Newton-John. However, co-founder Jackson Berkey is absent from the lineup. 2008 saw the release of the CD Christmasville. Their next release was a 25th anniversary Christmas box set consisting of previously released material, and in 2011 they released Mannheim Steamroller Christmas Symphony with members of the Czech Philharmonic Orchestra.

Musically, as the 1990s progressed Davis moved into the mainstream of «progressive rock» music with a heavier reliance on synthesized instruments and less humor (titles like «Small Wooden Bach’ses» from Fresh Aire III were not seen, let alone the creative use of a cricket on the same album or the Gregorian chant on Fresh Aire II). His music became closer to the «light jazz» style that gained prominence in the 1990s, especially with the Day Parts albums.

Steamroller developed a full-length theatrical motion picture based on their Christmas albums, but the plans fell through. Instead, the following year, they collaborated with Olivia Newton-John for yet another Christmas album, a mostly spoken-word recording, scored with previously released material called The Christmas Angel: A Family Story. In 2003, they released a CD entitled Halloween.

In addition to their Fresh Aire and Christmas collections, Steamroller has released an album of Disney music (1999’s Mannheim Steamroller Meets the Mouse), one celebrating his American heritage (2003’s American Spirit, which reunited Chip Davis with C.W. McCall and featured a remake of «Convoy»), and an album Yellowstone, mixing prior Davis compositions and a series of classical pieces by Ottorino Respighi and others.

Mannheim Steamroller’s An American Christmas is a 12-hour nationally broadcast special radio program of music and narrated stories, heard on over 250 stations across the United States. The program is hosted by the group’s founder Chip Davis, and is produced and distributed each year by WestStar TalkRadio Network.

In 2008, Chip Davis underwent surgery which prevented him from touring or performing with the band. Rather than force the tour to stop completely while he recovered, Davis opted to hire additional musicians to temporarily replace him. He also decided to create two different lineups of the band, nicknamed the «red» and «green» touring companies.

The group appeared in the 2011 and 2013 Macy’s Thanksgiving Day Parade, playing their version of «Deck the Halls.»

1989 Yellowstone: The Music of Nature

2012 Safari (re-release of Saving the Wildlife)

2013 The Music of the Spheres (re-release, added five tracks, removed one)