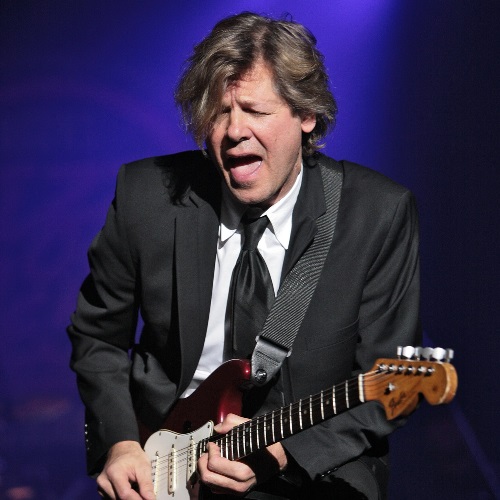 Jeff Golub (April 15, 1955 – January 1, 2015) was an American jazz guitarist. Golub was a contemporary jazz guitarist with 12 solo albums and three CDs as the leader of the instrumental band, Avenue Blue. Before becoming an instrumentalist, Golub worked as a sideman to a number of successful rock and pop artists.

He was arguably best known for his work with Rod Stewart, with whom he played from 1988 until 1995 performing on four albums and five world tours, as well as recording the live DVD, One Night Only, at the Royal Albert Hall.

Indeed, in a musical journey that spans more than three decades and encompasses a diverse assortment of projects from across the jazz, blues and rock spectrum, the visionary guitarist has maintained the same honesty, enthusiasm and creativity that first won him his reputation as one of his era’s most skillful and original musicians. Whether it’s his own inventive yet effortlessly accessible recordings or his collaborations with a dizzying array of artists, Golub’s work is consistently distinguished by the versatility and imagination that he brings to everything he does.

Those qualities are all prominent on Train Keeps A Rolling, a sublimely soulful set that matches Golub’s compelling guitar work with the talents of legendary English keyboardist Brian Auger, whose iconic organ playing is a cornerstone of British rock, jazz and R&B, and whose seminal ’70s jazz-rock band, Brian Auger’s Oblivion Express, was a crucial early influence upon Golub’s musical consciousness.

Golub and Auger’s vibrant rapport is apparent throughout Train Keeps A Rolling, driving a lively batch of soul-jazz numbers that includes the Golub-penned title track and «J&B» and some beloved items from Auger’s vintage repertoire (i.e. the instrumentals «Isola Natale» and «Shepherds Bush Market,» and the vocal tunes «Happiness Is Just Around The Bend» and «Whenever You’re Ready»), along with infectious instrumental readings of classics by soundtrack composer Lalo Schifrin («The Cat»), blues icon Willie Dixon («Live The Life I Love») and soul legend Curtis Mayfield («Pusherman»).

Joining Golub and Auger on the album’s 11 tracks are three other Oblivion Express members-drummer Steve Ferrone, singer Alex Ligertwood and bassist Derek Frank-as well as percussionist Luis Conte and a stellar horn section comprised of Mindi Abair, Nick Lane, Steve Madaio and Dave Woodford. Also lending their talents are a pair of notable guest vocalists: Christopher Cross, who delivers a distinctive rendition of Ace’s ’70s hit «How Long,» and Ambrosia frontman David Pack, who lends his voice to a memorable reworking of the old Police chestnut «Walking on the Moon.»

Train Keeps A Rolling marks the culmination of Golub’s longstanding goal of collaborating with Auger. «I’ve wanted to work with Brian for a long, long time,» Golub asserts. «I was around 15 or 16 when I heard Brian Auger’s Oblivion Express for the first time, and it really opened my ears and changed the way I thought about music. They were rock musicians playing jazz, and playing it well, and that was real foot in the door for me.

«This whole project was just so inspiring to work on,» he continues. «Brian really brought a lot to it, and it was inspiring to play with him and Steve and Derek and Luis Conte. The intention was to make an immediate, live-sounding record, and I think that we did that. We did all of the rhythm tracks in three days, then we did the horns and percussion in a day, and I overdubbed some guitars at home.»

Throughout his lengthy career, Golub has explored a wide range of musical territory, from jazz improvisation to electric blues to smooth jazz to mainstream hard rock, balancing his own projects with such collaborative efforts as his eight-year tenure as lead guitarist in Rod Stewart’s band. The Copley, Ohio native grew up with an eclectic musical sensibility, absorbing childhood influences from the Grand Ole Opry to the British Invasion, before discovering such inspirational guitarists as Wes Montgomery, George Benson, Larry Carlton, Eric Clapton, Jeff Beck, Jimi Hendrix, Muddy Waters and Buddy Guy.

While studying at the prestigious Berklee College of Music in Boston, Golub gained some crucial stage experience as a member of regional hero James Montgomery’s band. In 1980, he settled in New York City, where he still resides, and soon landed a gig backing ’80s arena-rock star Billy Squier, with whom he did three world tours and recorded seven albums. His work with Squier helped to earn Golub a reputation that led to him working on stage and/or in the studio with such artists as Tina Turner, Peter Wolf, John Waite, Vanessa Williams, Gato Barbieri and Bill Evans.

In 1988, the same year that he began playing with Rod Stewart, Golub released Unspoken Words, his first album as a leader. While continuing to work with Stewart and other acts, Golub built an impressive resume of his own albums, both solo and as leader of the band Avenue Blue. Since then, his own recording projects have found Golub collaborating with such noteworthy peers as Gerald Albright, Henry Butler, Rick Braun, Jon Cleary, Marc Cohn, Richard Elliot, Robben Ford, Sonny Landreth, Jeff Lorber, Kirk Whalum and Peter White.

Golub’s musical progress was thrown for a loop, at least temporarily, in June 2011, when he suddenly lost his sight due to the collapse of his optic nerve. Rather than allow this potentially devastating setback to divert him from his musical course, he simply picked up the pieces and got back to work.

«Fortunately, I’m in one of the few professions where I can get by without my sight,» Golub states, adding, «It’s made me a better artist. It’s opened up my ears, and I hear things more acutely now. It’s put me more in touch with my feelings and with my public. My audience has been incredibly supportive.»

The title of Train Keeps A Rolling nods both to the influence of Brian Auger’s Oblivion Express, and to an incident in September 2012, when Golub fell on the tracks of a New York subway and was dragged by a train before being rescued by good samaritans. Amazingly, he walked away from the potentially fatal accident with only minor injuries.