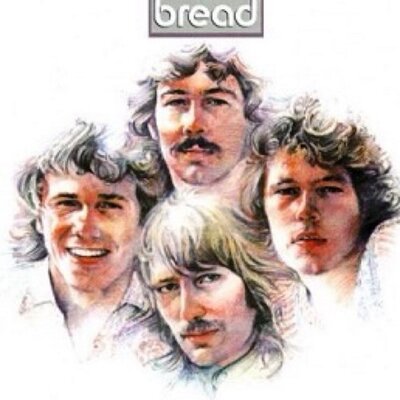 Bread was an American soft rock band from Los Angeles, California. They placed 13 songs on the Billboard Hot 100 chart between 1970 and 1977.

David Gates was from Tulsa, Oklahoma. He released a song in the late 1950s entitled «Living Doll» on Atlantic Records. Gates knew Leon Russell and both played in bar bands around the Tulsa area. Both Gates and Russell headed for California to check out the music scene there. Before forming Bread, Gates had worked with Royer’s previous band, the Pleasure Fair, who recorded one album for the UNI Records label with Gates producing and arranging. Royer then introduced Gates to his songwriting partner, Griffin, and the trio joined together in 1968 and signed with Elektra Records in January 1969, after choosing the name «Bread» in late 1968, when Griffin and Royer pulled up behind a Barbara Ann Bread truck at a stoplight (see the 2001 The Best Of Bread version). The group’s first single, «Dismal Day», was released in June 1969 but did not chart. Their debut album, Bread, was released in September 1969 and peaked at No. 127 on the Billboard 200. Songwriting on the album was split evenly between Gates and the team of Griffin-Royer. Session musicians Jim Gordon, and Ron Edgar, accompanied the band on drums for the album.

On July 25, 1969, Bread appeared in concert for the very first time, with Gordon on drums, at the Aquarius Theater in Hollywood, opening for the Flying Burrito Brothers. When Gordon’s schedule conflicted and he proved unavailable for future outings, they brought in Mike Botts as their permanent drummer. Botts, whom Gates had previously worked with in Botts’s group The Travelers 3 as a producer, appeared on their second album, On the Waters (released in July 1970 and peaking at No. 12 on the Billboard 200). This time their efforts quickly established Bread as a major act with the Billboard Hot 100 No. 1 hit «Make It with You» in 1970. «Make It with You» would be Bread’s only No. 1 on the Hot 100.

For their next single, Bread released a re-recorded version of «It Don’t Matter To Me», a Gates song from their first album. This single was a hit as well, reaching No. 10. Bread began touring and recording their third album, titled Manna (March 1971), which peaked at #21 and included «Let Your Love Go» (which preceded the album’s release and made No. 28) and the Top 5 hit single, «If». As with the first album, songwriting credits were split evenly between Gates and Griffin-Royer.

Royer, after conflicts with Gates, left the group in the summer of 1971 after three albums, although he would continue to write with Griffin. He was replaced by Larry Knechtel, a leading Los Angeles session musician who had played piano on Simon & Garfunkel’s «Bridge Over Troubled Water» single in 1970.

In January 1972 Bread released Baby I’m-a Want You, their most successful album, peaking at No. 3 on the Billboard 200. The title song was established as a hit in late 1971 before the album was released, also hitting No. 3. Follow-up singles «Everything I Own» and «Diary» also went Top 20.

By 1973, fatigue from constant recording and touring had set in despite the band’s success, and personal relationships began to show strain, especially between Gates and Griffin. All eleven of Bread’s charting singles between 1970 and 1973 had been written and sung by Gates. Elektra Records had invariably selected Gates’ songs for the A-sides of the singles, while Griffin felt that the singles should have been split between the two of them. There was also some dissatisfaction with the songs planned for a sixth album and as a result, Bread decided to disband after having all their equipment and instruments stolen prior to a scheduled concert at the Salt Palace in Salt Lake City in May 1973.

Gates and Griffin returned to their solo careers with mixed results. The Best of Bread compilation album from March 1973 was a huge success, peaking at No. 2 on the Billboard 200 and staying on the chart for over two years. The follow-up, The Best of Bread, Volume 2, was released in May 1974 and went to No. 32.

The reunion of the group in 1976 came about after Elektra Records expressed interest in another Bread album. Gates, Griffin, Botts and Knechtel returned to the studio that year and recorded the album Lost Without Your Love, released in January 1977. The title track, again written and sung by Gates, was the band’s last Top 10 hit, peaking at No. 9 on the singles chart. This comeback record reached No. 26 on the Billboard 200 and was Bread’s seventh consecutive album (including the two best ofs) to be RIAA-certified gold. In March 1977, Elektra released a second single, «Hooked On You». It was less successful on the pop chart (peaking at No. 60) but it reached No. 2 on the Billboard Adult Contemporary chart.

The four members of Bread (along with session guitarist Dean Parks) toured throughout the spring of 1977 to support their comeback album. After a short break, they commenced the tour’s third leg that summer without Griffin, whom Gates failed to invite after further rising tensions and Griffin’s worsening substance abuse troubles. They ended the year with no further plans to record as a group.

In 1978 Gates enjoyed success as a solo artist with the hit singles «Goodbye Girl» (#15; from the movie The Goodbye Girl) and «Took the Last Train» (#30). He then continued to tour with Botts and Knechtel as «David Gates & Bread» and make TV appearances, including a guest shot on The Hardy Boys Mysteries which aired in November 1978. The group’s 1978 touring line-up once again included Dean Parks for their June tour of the UK and Europe. But for their fall dates back in the US, Parks had left but the stage lineup had expanded to include Warren Ham (ex-Bloodrock; woodwinds, keyboards, backing vocals), Bill Ham (guitars) and David Miner (bass). This led to a legal dispute with Griffin over use of the band’s name, of which Griffin was co-owner. In the dispute, Griffin again complained that Gates’ songs were given preference as singles over his. The resulting litigation, which resulted in the Bread name being retired altogether by late 1978, was not settled until 1984.

After leaving Bread in 1971, Royer stuck mostly to songwriting (still teaming up with Griffin on occasion). As with Griffin, he eventually kicked his drug problems and his success was mostly in writing for artists in the country music field in the 1980s and 1990s. In 1994 Royer, Griffin and Knechtel re-united under the name «Toast». Knechtel had continued to be an in-demand session player, backing up such artists as Elvis Costello. In September 1994, after being out of the spotlight for thirteen years, Gates released a new solo album, Love is Always Seventeen.

In 1996, having settled their differences, Gates, Griffin, Botts and Knechtel reunited Bread for a successful «25th Anniversary» tour of the United States, South Africa, Europe and Asia. This time out, the group was accompanied by Randy Flowers (guitars), Scott Chambers (bass) and a string section to help them capture the sound of the records. This tour was extended into 1997, which would be the last year the members of Bread would ever perform together. Gates and the others then resumed their individual careers. Bread was inducted into the Vocal Group Hall of Fame in 2006.

In 2005, both Griffin and Botts died from cancer at the age of 61. In August 2009, Knechtel died of a heart attack at the age of 69, leaving Gates and Royer as the only surviving members of Bread. Royer continues to be involved in music, initially working out of his Nashfilms studio in Tennessee before relocating to the Virgin Islands during 2013, while Gates contents himself with retirement at his home in Washington with his wife Jo Rita. In 2010 Royer released a Jimmy Griffin tribute album consisting of songs written by both himself and Griffin.

During March 2014, Helter Skelter Publishing (UK) issued the first biography of the band, a limited edition hardback titled Bread: A Sweet Surrender (originally called Manna from Heaven: The Musical Rise & Fall of Bread).[2][3] It was written with the assistance of many surviving family members and musical colleagues of the band, along with exclusive interviews with founding member Robb Royer. A paperback/soft-cover edition appeared during 2017. The following year saw Royer publish his own memoirs, «The View from Contessa», featuring tales from his own varied career, available as an eBook via Amazon.

1977 Lost Without Your Love