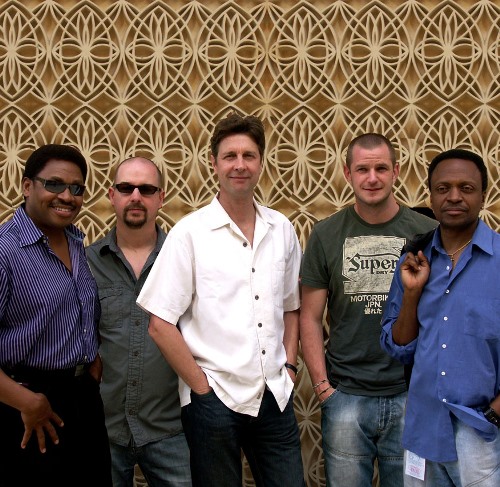 Acoustic Alchemy is an English contemporary instrumental and smooth jazz band formed in England in the early 1980s (c. 1981), originally fronted by acoustic guitarists Nick Webb and Simon James. The band is currently fronted by Greg Carmichael and Miles Gilderdale.

During the 1980s, there was little grateful audience for this form of music in the UK, and the big players in the genre were all American. The pioneering sound of two duelling acoustic guitars — Simon James on nylon and Nick Webb on steel — was a fresh touch on the genre, often backed up by a double bass, percussion, and occasionally string quartet The Violettes. A couple of records were pressed by Webb, but at a considerable loss. In the mid-1980s, James left the band; in the 1990s he would go on to formKymaera, a similar, albeit more Latin oriented band. In 1985, Webb then discovered Greg Carmichael, a guitarist with a London pub band called The Holloways (not affiliated with the current indie band of the same name) who became James’ successor.

The new pairing got work as an in-flight band on Virgin Atlantic flights to and from the United States. Six weeks after sending demo material to Nashville-based label MCA, the band was called to record their first album. The pair had literally played their way to America, and in 1987 released their debut album, Red Dust And Spanish Lace. The project saw them joining forces with other like-minded musicians such as Mario Argandoñaon percussion and Bert Smaak on drums. The album was the first of many to be recorded at the Hansa Haus Studios, in Bonn, Germany. This was where they met sound engineer Klaus Genuit, who has worked on many of the band’s albums.

Acoustic Alchemy were soon moved to the world’s biggest jazz label, GRP Records as MCA bought GRP in February 1990. Six more albums followed, starting with the 9-trackReference Point (1990), featuring a cover of Dave Brubeck’s classic, «Take Five». Then a live favourite, the track was the band’s only recorded cover to this day. The critically acclaimed Back On The Case (1991) followed, a ten-track collection which rivalled the innocent brilliance of the band’s début four years previous.

For their eighth album, Arcanum (1996), the band decided to take a retrospective look back by re-recording some of the band’s most popular tracks. The album was recorded inLondon’s Pinewood Studios, along with the string section of the London Metropolitan Orchestra. The collection included three new tracks, «Columbia», «Something She Said» and «Chance Meeting», along with recreations of nine classics. Personnel on the recording was Webb, Carmichael, Sheppard, Murphy and Parsons. It was produced by Aubry «Po» Powell (acclaimed for his work with Pink Floyd, Paul MacCartney and Page Plant). Positive Thinking… (Acoustic Alchemy) (1998) was to be Acoustic Alchemy’s last album with original frontman Nick Webb. It was recorded over a week’s time in a Manor House near Bath, England in Munkton Combe. Recorded by Steve Jones, the musicians were Greg Carmichael, (nylon string guitar), John Sheppard (drums), Dennis Murphy (bass). Webb was diagnosed with pancreatic cancer prior to starting work on it, and became progressively worse throughout the project. In the end, he could only offer inspiration, as he was too weak to play at recording sessions. Nick Webb died on February 5, 1998.However, the album was perceived as one of the band’s best. With the general upset surrounding Webb’s passing, David Puttick, an artist and composer, had a large part in the composition behind the songs «Auguststrasse 18» and «Limited Excess», by donating two of his own compositions to be used as backing tracks for the guitar duo, but was (erroneously) never credited. After the release of «Sounds Of St Lucia», which featured a live version of «Auguststrasse 18» in 2003, five years after Nick Webb’s untimely death, the matter of credits to David Puttick had still been forgotten.

After Nick Webb’s death, Greg Carmichael decided to continue with the band, but with big changes. He brought in understudy Miles Gilderdale as his playing partner, and the band moved label to EMI’s Higher Octave, home of fellow guitarist Craig Chaquico, and popular synth trio 3rd Force. The début album on the label, The Beautiful Game (2000) brought dramatic changes. New, stronger influences came from all sorts of genres, and it soon became clear that experimentation and diversity were to be a key element to the new band.

AArt (2001) was released a year after, and was their biggest release to date. Playing for over an hour, containing fourteen tracks, and with assistance from saxophonist Jeff Kashiwa, the album was nominated for a «Pop Instrumental Album» Grammy Award. Their 1990 album Reference Point was also nominated for a Grammy.

Acoustic Alchemy’s third album with Higher Octave, Radio Contact (2003), featured the band’s first ever track to include a vocal, «Little Laughter», performed by Jo Harrop. Harrop was a backing vocalist, found by Gilderdale whilst doing a session with Latin singer Enrique Iglesias.

The band’s previous release, American/English (2005), is an eleven track collection which further explores a wide range of varying genres, all with the signature Acoustic Alchemy feel.

Early in 2006, bassist Frank Felix left the band, to concentrate on other projects. The position now has been filled by two bass players; former Incognito and Down to the Bonebassist, Julian Crampton for UK dates and Gary Grainger (brother of longtime drummer Greg Grainger) in the US.

On the February 4, 2007, Acoustic Alchemy announced that they had recently completed recording the album, This Way, released in the United States on June 6, 2007. Comprising eleven tracks, it features special guest appearances from trumpeter Rick Braun and collaborations with label-mates Down to the Bone.

Acoustic Alchemy’s latest album, «Roseland», was released in September 2011. As of 2013, they are currently touring throughout the USA, London, Russia and Latvia.

. 2002 The Very Best of Acoustic Alchemy